In Praise of Picnic Races 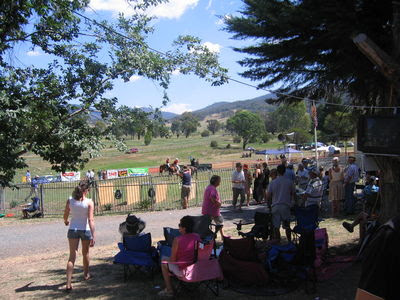 How to describe the flavour? Well, I used to be a member of the Armidale Picnic Race Club and for a number of years brought a group of friends up from Canberra to attend.

The day began with the Calcutta in which horses were essentially raffled off. This created a prize pool which was distributed at the end of the day.

Then to the race course for a chicken and champagne lunch followed by the races. The atmosphere here was strictly social. Most of us had no idea as to the quality of the horses beyond any previous results on the picnic races circuit, so we had to find out as best we could.

Late afternoon and we all adjoined for drinks before dressing for the Picnic Races Ball. In all, great fun.

For a period picnic races went into decline. Numbers in local farming and grazing communities had diminished, while those left simply did not have the cash to afford the costs of horses. Now the position appears to have stabilised, with increasing numbers of visitors coming from the city to enjoy the show.

Some people used to be reluctant to attend picnic races because they were seen, with some truth, as the preserve of the social elites. This is no longer true. My experience has been that all clubs welcome visitors.

While Victoria has its own web site, information about specific meets elsewhere can be a little hard to come by. However, a simple Google search will bring up most meets.