As 2007 draws to a close, a happy new year to all. May it bring renewed peace and happiness to us all.

There were, I think, 105 posts on this blog during the year. Over 2008, I am looking forward to exploring further the remarkable variety and texture of life across the vast expanses of Regional Australia.

Posted by Jim Belshaw at 6:11 am No comments:

The Bureau has now released its projections for the January to March period. The biggest change is an increased chance of below average rains in a big north-south strip through the centre of the country.

The area in WA with the highest probability of above average rain has moved south. In the east, the belt of higher projected rainfall continues to be centred on southern Queensland and Northern NSW.

Posted by Jim Belshaw at 1:51 pm No comments:

I have been meaning to mention this site for a little while.

The Australian Government maintains a site called Culture and Recreational Portal that is, I think, a superb site for information about Australia, including Regional Australia. I use it all the time, often getting distracted and just browsing.

Do have a look.

Is Australia the world's driest continent?

My father, who as a Kiwi, used to tease Australians sometimes that one third of Australia was desert, one third semi arid, and the other third not much use anyway! Certainly Australia is a dry continent, but is it the driest?

Looking at The Weather Doctor, I see that Antarctica is the driest continent, but it is not inhabited outside research teams and support.

If we look just at South America, we can eliminate Europe and South America from the possibilities although South America has the driest area on Earth, outside the polar continent, located in Chile. North America could have a strong argument in the northern regions, but the southern areas such as Central America are quite wet. That leaves the A continents: Australia, Africa and Asia.

Looking at the climate classification maps, Australia seems to have the highest percentage of dry climates. But the Sahara is larger in area than all of Australia. And the dry interior of Asia along with the Middle East and dry areas of China and India give Asia large dry regions.

Still, if we look at overall patterns, The Encyclopedia of Climatology gives the following facts about Australia:

This leads The Weather Doctor to conclude that Australia can fairly claim to be the world's driest inhabited continent in an overall sense.

Posted by Jim Belshaw at 6:28 am No comments: 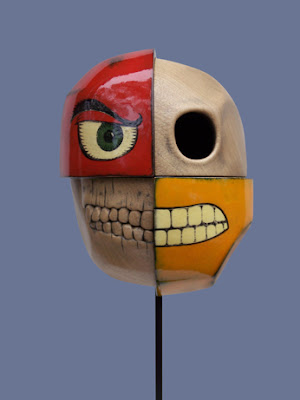 Peter Wade, Head on a Stick No 12, Grafton Regional Gallery

My thanks to the Australian Regional Food Guide for drawing my attention to the Life Style Channel's national I love food awards. This covered all parts of Australia including the metros.

Posted by Jim Belshaw at 7:05 pm No comments:

Australia's size makes for considerable variation in climate and weather across the country. All Australians know this, but our knowledge is often limited to the headlines associated with weather extremes.

To help myself better understand these variations, I am creating a new climate weather tag to draw together posts in this area.

Posted by Jim Belshaw at 2:24 pm No comments:

I see that Peter Bailey and the team from Country Week have put up a new web site intended to help those wishing to relocate to Regional NSW.

On the surface, the site looks good and I wish them well.

Posted by Jim Belshaw at 6:33 am No comments: