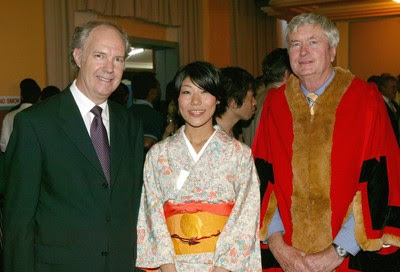 More than 100 students, newly arrived at the University of New England from 21 overseas countries, received a civic welcome to Armidale in the Town Hall on Friday 22 February 2008.

They represented a total of 222 new overseas students at UNE this year – about double last year's number.

The Mayor, Councillor Peter Ducat, said it was "a great honour" for him to be welcoming the students in a Town Hall decked with the flags of so many countries. "And it's a great honour for Armidale that you've chosen our city as a place to study," he continued.

Councillor Ducat welcomed each of the UNE students – as well as several overseas students at Armidale schools – in person. "The people of Armidale enjoy the cultural experiences you bring," he told them. "We want to participate in your cultures, and we encourage you to participate in ours."

He invited them to continue their relationship with Armidale after completing their current study programs by returning for further study or on business.

The Vice-Chancellor of UNE, Professor Alan Pettigrew, urged the students to enjoy their Armidale experience and to consider the possibility of subsequent degree courses at the University. He remarked on the increasing numbers of overseas students coming to Armidale.

The largest national group at the welcome, comprising more than 40 students, was that from China, while the second largest (20 students) was from Japan. Among the largest of the other groups were those from Bhutan, Papua New Guinea, Saudi Arabia, South Korea and Thailand.

Sayaka Nunotani (pictured here), a second-year UNE student from Osaka in Japan, thanked the City and the University on behalf of all the international students. Ms Nunotani said she had arrived at UNE's English Language Centre in 2006 and, having completed the English language course, was now in the second year of a Bachelor of Business degree program.

"Coming to Armidale has changed my life," she said, "and I feel very lucky that I made the choice to come here. On behalf of us all, I thank the people of Armidale who have accepted and welcomed us into their community."

She told the newly-arrived students that Armidale – with its University – was a place of "fresh air and clear skies", surrounded by a rich natural environment, and inhabited by friendly people.

Posted by Jim Belshaw at 7:21 am No comments:

I have been taking some time off posting for R&R. I plan to resume posting at the end of the month.
Posted by Jim Belshaw at 5:03 am No comments: