Photo: Colours of the Desert. This photograph was taken by Gordon Smith at the Aboriginal Rock Pools, a place where water is stored in pools worn into the rock, near Byrock south of Bourke in NSW.

I see that Gordon Smith has begun another outback tour on his photo blog. These tours are great fun because Gordon combines his photographs with short commentary to create a photo journal. The introductory post in the series can be found here.

Posted by Jim Belshaw at 5:05 am No comments: 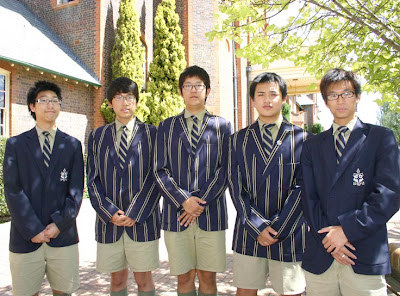 In an earlier post I talked about the advantages that Australia's regional universities could offer international students as compared to their metro equivalents. The same thing holds at school level.

In my last post I mentioned The Armidale School (TAS), one of Australia's leading private schools.

First, these senior students are charged with providing advice and guidance to the younger and newer overseas students. This is a role that is best carried by those who have shared the experience and understand the challenges that language, culture and distance from home and family present.

Second, they meet with the Headmaster on a regular basis to offer advice and refer matters which particularly relate to overseas students.

Posted by Jim Belshaw at 5:51 am No comments: 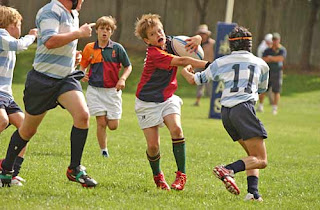 In an earlier post I commented on the strong performance of the University of the Sunshine Coast in the student satisfaction measurements.

Browsing around, I came across another story that pleased me because it linked some of the things I write about on this blog, the richness and diversity of life in Regional Australia.

Last September I wrote of the remarkable history of the Winifred West Schools. TAS (The Armidale School) is another such story.

Founded in 1894 to meet the needs of the children of New England landowners, TAS has evolved into one of Australia's premier boarding and day schools for boys. The school now has superb facilities and a rich campus life.

In April, the Sunshine Coast Grammar School's Under 12s (22 boys and 35 parents and supporters) travelled by bus to Armidale, having been invited to compete in the annual TAS National Primary Rugby Carnival on the weekend of the 20th April.

"Our boys joined such illustrious Rugby Nurseries as The Kings School, Riverview, Knox Grammar, and Tudor House from Sydney; Brisbane Grammar, The Southport School and Toowoomba Prep from QLD, and regional powerhouses Kinross-Wollaroi from Orange, Dubbo Roos, Tamworth Juniors, and Moree Juniors...25 in all."

The Sunshine Coast boys played well on this initial outing, finishing their Pool games with wins over Tudor House and St Patricks College (Sydney), narrow losses to Tamworth Juniors and Kings School and a draw with eventual winners highly fancied Brisbane Grammar. They then played a heart-stopping 1 point win over previous conquerors Kings School in the playoffs to finish third.

"The boys had a wonderful chance to experience life at one of Australia's premier Boarding Schools, boarding in Croft House and eating with the other players in the magnificent TAS dining hall."

Posted by Jim Belshaw at 4:05 am No comments:

I have been doing a series of posts exploring the Kimberley Region in West Australia.

I noticed that Heather from the Australia Travel Guide blog has just visited the area and has also been doing some posts. You can find her posts here, here and here.

In my last post I mentioned Australian state borders and the strange case of Jennings, a little known NSW and/or Queensland town depending on where the border is.

Jennings' twin town, Wallangarra, is better known because it is on the New England Highway. Wallangarra is also the most southern town in Queensland's Granite Belt, the Queensland part of the New England Tablelands known for its fruit and wine. I mentioned in an earlier post that I had just visited the Granite Belt and would write some stories once my photos were back.

While Wallangarra is better known, I suspect that far to few people stop and visit the railway station. It is worth a visit.

Wallangarra was the junction on the Great Northern Railway, once the main Sydney-Brisbane rail line, between the NSW and Queensland railways with their different rail gauges. Upon arrival, passengers used to carry their luggage across the station to join the train on the other side.

The photo below shows the Queensland side of the station, still a sometimes working platform. Sadly, NSW abandoned its part of the railway in the 1970s. The roof shape and hanging baskets are typical of Queensland stations. 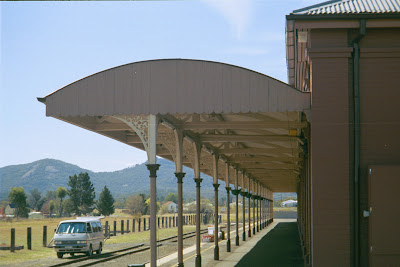 Now look at next photo. This is the NSW side. The flat roof is typical of NSW stations of the period. One railway station, two very different feels carefully maintained to preserve the difference. Very much worth a visit. 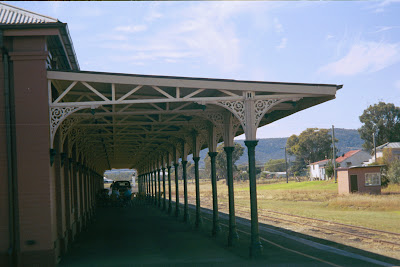 Posted by Jim Belshaw at 5:31 am No comments: 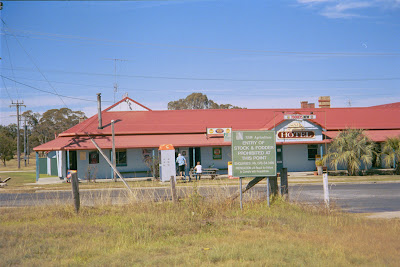 This photo is taken standing in Wallangarra, Queensland, looking across the border into the NSW village of Jennings.

Letters of patent dated June 6 1859 defined the boundary between Queensland and New South Wales as lying between Point Danger, following watersheds and rivers, to the line of parallel of 29° South.

The border was surveyed between 1863 - 1866, from Point Danger to the Dumaresq River by Francis Roberts of Queensland, and Isiah Rowland of New South Wales. The two were supposed to work together but fell out, each then completing a separate survey. NSW records of the survey were destroyed in a fire, and both state governments settled on the Queensland survey.

In 2001, modern surveyors retraced the steps of Rowland and Roberts as part of a Centenary of Federation project, and found a 200 metre error. On the surface this might not seem like much to be concerned about, however the error occurs at the point where the twin towns of Wallangarra (Qld) & Jennings (NSW) are located, on the New England Highway.

It appears that the originally intended boundary would put most of Jennings squarely inside Queensland. Jennings locals did not take kindly to the idea. Public sentiment is that Jennings has always been in New South Wales, and always will be.

Posted by Jim Belshaw at 9:13 pm No comments:

WHEN THE MAGIC OF MUSIC TRANSFORMS A TOWN - The Mungindi Music Festival, September 28-30, 2007 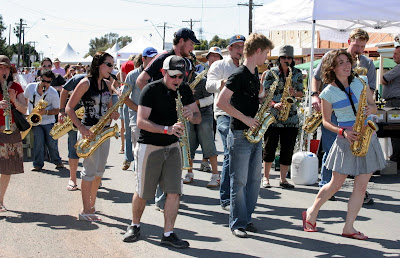 Spring of 2005 - the magic of music transformed the drought-ravaged town of Mungindi in North West New England into a place overflowing with creative spirit and friendly people.

The little town that most people would drive through staged an extraordinary music festival, attracting such iconic Australian musicians as Don Burrows, Mark Wallton and the trio Brother. Its population of 700 almost tripled over that weekend.

This festival was meant to be a one-of. After its amazing success of this inaugural festival, and despite the relentless drought, Mungindi is staging its second music festival in September.

The 2007 Festival promises to be as unique as the first, with the most significant event being the performance of a specially commissioned work for orchestral performance, narration and song.

To be called Mungindi Mosaic, the work will include orations that reflect the experiences of the Mungindi community. Mr Brian Buggy, OAM, one of Australia’s leading composers and conductors, will be writing the work.

The Sydney Youth Orchestra Philharmonic, local musicians and the local choir will perform the piece, along with all the district’s children, who will form another choir.

One of the unusual aspects to the festival are the performance venues, which include the showground, town halls, wheat paddocks, churches and riverbanks.

The music on offer is as diverse as the venues, with styles appealing to all tastes, with a bit of everything from classical to jazz to funk to choral and rock.

Festival Director Mark Walton said the idea of the festival is to make music more accessible and encourage anyone who’s musically inclined to participate. Its theme is “Community Music Making at its Friendliest”.

Mr Walton said anyone who decides to go the Festival will come away with a new perspective on country towns, as well as a musical experience unlike any other.

The festival’s performers will include:

Music workshops will be run in the days prior to the festival and there’ll be Toddlers Proms conducted by the Sydney Youth Orchestra on the Saturday afternoon. Toddlers Proms children aged 2-7 to the instruments, sounds and sections of a full symphony orchestra. Audience members are encouraged to clap, march, sing, and dance along to the music, to play the big bass drum, and some lucky youngsters even get the chance to conduct the whole orchestra!

A number of tours will be offered during the Festival, including working farm & agricultural tours; star gazing tours and fishing tours.

Mungindi has just two small hotel/motels, so a Tent City is established for the festival. There’s also the Mungindi Caravan Park. Call (02) 6753 2213 for details and bookings.

You can hire a high quality tent in Tent City for the four nights of the festival for $300. The tents are complete with floors and lighting and include two fold-up beds with mattresses. Online booking is now available. To view Tent City please follow the link http://www.tentcityhire.com.au

Mungindi is 80 minutes northwest of Moree on the Carnarvon Highway. On a map, it’s easily recognised: it’s the place on the border between Queensland and New South Wales where the “wiggly bit” goes straight. Moree has an airport and railway station. Festival buses will pick up participants from Moree to take them to Mungindi. Shuttle buses will transport patrons between events around Mungindi.

Tickets are available online. The festival web site is off line today. I will add this detail later.

Posted by Jim Belshaw at 5:20 am No comments: 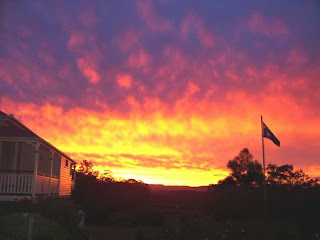 The delay in posting was due to a visit to Queensland's Granite Belt, the name given to the northern extension of the New England Tableland into Queensland.

The photo is from Ballandean Lodge where we stayed, a fair representation of the magnificent sunsets.

I will do some full posts as soon as my photos are back.

Posted by Jim Belshaw at 9:15 pm No comments:

I will be away, so am taking a short break from posting.
Posted by Jim Belshaw at 6:01 am No comments: