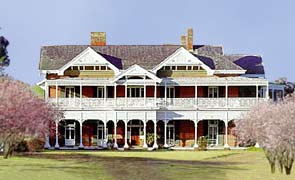 Talking to a friend last night about the main Regional Living Australia site, she asked why we were featuring wool so prominently just at present. Too her and she thought most Australians, wool was of little interest.

A week or so before that one of us, a knitter, tried to buy some wool. She did a yellow pages search and found just sixteen yarn suppliers in all of Greater Sydney. Taken together, these two experiences actually explain why we have been presenting wool and the wool industry as one key element in the Regional Australia experience.

Waltzing Matilda, Australia's best know song, is set in the wool industry. The squatter riding up on his thoroughbred was not someone squatting in a vacant and run down urban building, but a wealthy pastoralist who may well have lived in a house not to dissimilar to Belltrees (photo).

As outlined in our short history of the Australian wool industry on the Regional Living Australia site, wool and the wool industry have played a critical role in Australia's history and have left an indelible mark on the landscape, life and culture of Regional Australia.

We have adopted the title "On the Wool Track" as the name for the overall section. This is the title of a famous 1910 book by Charles Bean, the well known Australian war historian.

Then a journalist, Bean reluctantly accepted as assignment to do a series of articles on the wool industry in western NSW. He became fascinated with the character of the men working in the industry, and turned his articles into a book. Bean would later conclude that the character of men such as these were central to the success of the Australian diggers during the First World War, something that he encapsulated in what became the ANZAC legend.

Because the wool industry was so widely spread and influential, we faced a challenge in making it propely accessible. To properly experience something, you need to understand it and be able to put it into a context.

We decided that the best way of doing this was to try to present wool in a series of regional snapshots allowing people to explore the wool track across areas. We chose New England as the first study because this is an area that we know well. Other areas will be added.

We hope that you enjoy exploring the wool track, finding out about its impact on Regional Australia.

Posted by Jim Belshaw at 8:37 am No comments: 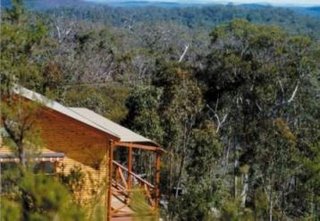 One of the things that can attract people to life in Regional Australia is the thought of working from home in a new and relaxed life style. This certainly holds for some.

Paul is based in Bucketty, a small community in the lower Hunter about 100k north of Sydney. Paul's description of his home and office (see photo) paints an almost idylic picture.

His stories of life at Bucketty including bushfires (Paul is in the local bushfire brigade) included in his newsletters have made Bucketty well know world wide.

Paul's success in building an internet based international business is not unique and indicates what can be done. However, those wishing to follow this route are well advised to do some preliminary investigation first.

Des's site has a strong blogging focus reflecting his role as a blogging evangelist. But it extends well beyond this and is worth a visit if you are seriously interested in a home business within an internet environment.
Posted by Jim Belshaw at 9:18 am 2 comments: 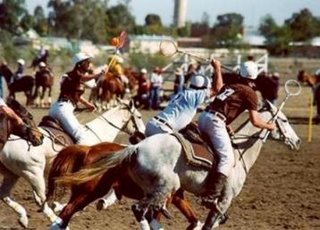 Have you ever wondered what polocrosse is?

If you don’t know, polocrosse is a combination of polo, lacrosse and netball, played on horseback. It was devised by Australians in 1938 and is often described as poor man’s polo.

Each rider uses a cane stick, made up of a polo stick shaft to which is attached a squash racquet type head with a loose twisted-thread net, in which the ball is carried. The ball is made of thick- skinned sponge rubber and weighs 140-155 grams. The aim is to score goals by throwing the ball through the 2.5 metre goal posts at each end of the field.

A team consists of six players, divided into two sections of three who play alternate chukkas of a maximum of eight minutes each, with either six or eight chukkas usually comprising a full match.

While polocrosse is a little unusual, it is a common event in the Northern NSW town of Narrabri.

There in 1976 the Falkiner family established six playing fields on their Murrumbilla property. Since then there have been regular matches, with the local Galloping Gully Polocrosse Club growing from just 5 to 36 players ranging in age from 7 t0 63.

The strength of the Club is reflected in the fact that it will have 3 players in the NSW team to play at the Australian National Championships to be held at Camden in October 2006.

Club members are also looking forward to the Polocrosse World Cup. This will be held in the southern Queensland town of Warwick in April 2007 and is expected to attract up to 25,000 visitors.

The Club welcomes visitors. The next scheduled matches are 12-13 and 26-27 August. Further information about the Club can be obtained by phoning Jo Hamilton on +61 427 (Australia 0427) 932 148. For general information on polocrosse visit www.nswpolocrosse.com.au.
Posted by Jim Belshaw at 11:09 am 1 comment: 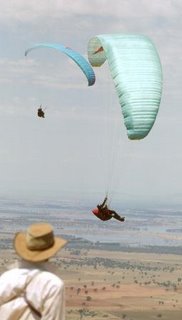 The 2007 FAI Paragliding World Championships will be held in Manilla (New England) from February 23 to March 10 2007. These, the 10th World Championships, are expected to draw 150 pilots from 50 different countries with an anticipated audience of between 3,000 and 5,000.

The Manilla location owes much to Godfrey Wenness. A former Sydney property developer, Wenness bought an old sheep property at Mt Borah just outside Manilla in the mid nineties.

Mt Borah proved to be an ideal place for launching, enabling pilots to take off from any direction in almost any wind condition.

Manilla has a population of just 2,500. The whole community supported by the local council has gathered together to support the event and to guarantee visitors a superb country reception.

The annual Country Week expo will be held this year from 11-13 August at the Rosehill Garden Event Centre, James Ruse Drive, Rosehill Sydney. Entry is free.

Country Week aims to educate Sydney people about the opportunities for life and work offered by regional NSW.

The Expo format makes it easy for visitors to find out information about opportunities offered by a range of areas across NSW.

Each area will have information about employment and business opportunities, real estate and life style.

More information including on-line registration can be found on the Country Week web site - www.countryweek.com.au.
Posted by Jim Belshaw at 7:46 am No comments: 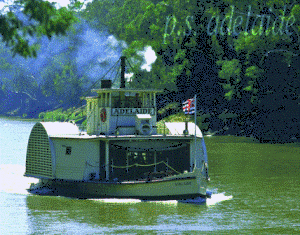 The previous post provided a historical overview of the role played by paddle steamers along the Murray-Darling River system.

Most of the current and former river ports have local museums providing information about past shipping.

General information about operating vessels along the Murray can be found on http://www.murrayriver.com.au/homepage.htm.

At Echuca the Port of Echuca - http://www.portofechuca.orf.au - operates three vessels including the PS Adelaide (see photograph). Built in 1866, the PS Adelaide is the oldest wooden hulled paddle steamer still operating in the world. Further information about Echuca can be found on http://www.echucamoama.com.

On the Darling, one vessel still operates providing short excursions from Bourke. See http://www.visitbourke.com.
Posted by Jim Belshaw at 7:53 am No comments:

While Australia's paddle steamers are no longer in active transport use, they still provide part of the texture of life along Australia's Murray-Darling River system. For that reason, their story remians an interesting one.

1836 saw the establishment of the colony of South Australia. The possible use of the Murray River as a highway to draw traffic and business into South Australia from the pastoral interior attracted early attention.

In 1850, just fourteen years after the colony's foundation, the SA Government offered a prize of 2,000 pounds each (a very substantial sum) for the first vessels to reach the junction of the Murray and Darling rivers. Two vessels, the Mary Anne and Lady Augusta, did so in 1853.

Between 1855 and 1859 a serious of adventurous voyages established the practical limitations of navigation along the winding sometimes tortuous river systems. A series of inland ports grew up: Bourke, Menindee and Wilcannia on the Darling; Balranald, Hay, Narranderra and Wagga Wagga on the Muurrumbidgee; Wentworth, Mildura, Swann Hill and Echuca on the Murray.

Ultimately nearly 200 vessels were built to service the trade. Initially Goolwa at the mouth of the Murray in South Australia was the main port. However, the river mouth created real problems for navigation, leading the South Australian Government to build a horse tramway (Australia's first public railway) from Goolwa to the nearby blue waters of the Southern Ocean at Port Elliot.

The freight business was too lucrative to allow South Australia's position to remain unchallenge. The Victorian Government quickly began to build a railway reaching Echuca in 1864. Echuca was only 250 kilometres (155 miles) from Melbourne, and the new line changed the shape of river trade. From this point, the majority of the steamers from the Murrumbidgee and Darling went upstream to Echuca instead of downstream to Goolwa. Measured by number of ships, Echuca became Victoria's second busiest port.

NSW had begun its own railway building program. During the 1880s these lines at last reached the navigable waters of the inland rivers first at Wagga Wagga, then at Albury, Narandera and Hay. In 1887 the railway reached Bourke, a line directly designed to capture Darling traffic. Freight previously sent by ship to Echuca or Morgan was now sent to Sydney.

From the beginning of the shipping trade there had been discussions about the need for works to improve river navigability, especially on the bigger Murray. As early as 1863 an intercolonial conference resolved that action should be taken to improve Murray navigation. However, no action was taken.

NSW was the core diffficulty. While improvements to river navigation might improve the position of NSW pastoralists, they would also damage the revenues of NSW's growing railway system. It was not until 1917 that the states signed the Murray River Waters Agreement establishing the Murray River Commission.

The new Commission began work on river improvements in the twenties, but by then the growing number of motor vehicles had sounded the final death knell for river shipping as a major transport mode.

Some shipping survived. However, the real resurgence of the paddle steamer came not from freight but from carriage of tourists who provided a far more lucrative marketplace.
Posted by Jim Belshaw at 2:31 pm No comments: 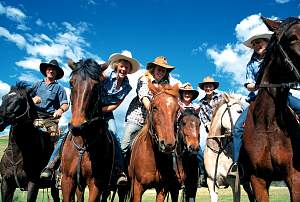 This blog has been established to provide a discussion forum for all those interested in life, work and play in Regional Australia, the vast expanse of Australia outside the main metro cities.

Our sister site - www.regionalliving.com.au - is intended to provide an entry point for all those interested in Regional Austrlia. Here we have found two problems:

We want to use this site to encourage response, to post a wider vaiety of interesting if sometimes ephemeral material.