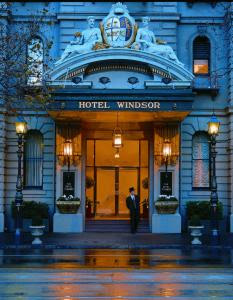 Photo: Hotel Windsor, Melbourne. This has been an all time favourite pub of ours for many years.

It may seem odd on a blog dedicated to non-metro Australia to use Melbourne and Sydney as examples to illustrate my continuing discussion about regional variation across Australia. However, this was such a nice example that I could not resist it.

The University of Melbourne maintains a blog documenting the experiences of its students abroad. Headed World's apart despite living so close, this particular entry describes the experiences of two students from different parts of Australia now studying in Montreal.

The writer is using the entry to make a point about the policies of the Howard Government, but in so doing she brings out regional differences in a very clear way. The story begins:

I never believed I lived a sheltered life in Melbourne, I went to a non-denominational, non religious school prominent with a variety of nationalities, races and religions and living in Melbourne I had come across a diversity of people. Despite the image, from many I have spoken to, that an Australians means someone who drinks beers, has long blond hair, is a surfer and wears only broad shorts and a necklace (well bikinis for females…of course) I have always been aware of the diversity of Australians. However, it was not until I came to Montreal and spent a good portion of my time with McBlonde that I realized how different we are within the one nation.

As happens to many of us when overseas, we have to explain Australia. She goes on:

As McBlonde and I were the only Australians in a large group of French we were constantly being questioned on what Australia was like in comparison to Canada, Montreal and the French lifestyle. However despite being good friends, McBlonde and I, were literally chalk and cheese.

She was from Sydney, I have forever lived in Melbourne, she was a country girl, I am a city girl, she does not think the coffee lifestyle is very big in Australia, I think coffee is a daily must, she is big on surfing and hanging out at the beach, I am big on eating at different restaurants and trying new cafes, she is into pubs and I am into bars. It did not matter what it was about McBlonde and I would disagree on all aspects of the lifestyle of Australians. We even had completely different vocabulary and accents…coming from the country McBlonde’s was much stronger and more apparent than mine.

So here we have a culture clash requiring two people from the same country with apparently similar backgrounds to get to know each other.

Through getting to know each we discovered while there are similarities about Australian lifestyle, the common bbq and cricket games, the trips to the beach and the knowledge that most Australia men indulge in endless hours of beer drinking, we realized that Sydney and Melbourne are completely different. We began to understand the reason why I thought a certain way was because I grew up in suburban Melbourne and McBlonde thought a certain way because she grew out in country NSW and attends university in Sydney.

Melbourne is multicultural, full of difference and very European in ambiance whereas Sydney is more American in appearance and lifestyle. It came to the point where when asked a question about what Australia was like in regards to renting an apartment, shopping, food, basically anything, the sentence would always start with “Well at least I know in Melbourne (Sydney when McBlonde was speaking) it is like this…”

Now there are aspects of this analysis that I would disagree with.

Melbourne is indeed a European city and becoming more so. By European I do not mean white, although Melbourne is less ethnically diverse than Sydney. But the city does have a cafe society and style that would be instantly familiar to anyone who knows Europe. Further, the buildings themselves such as the Hotel Windsor retain a European style.

Sydney, by contrast, is constantly reinventing itself, in some ways tearing down its past. Like McBlonde I grew up in country NSW, although I do not speak in the same way because the area that I came from had a far more "genteel" regional accent.

I am older than the writer and her friend McBlonde. The Sydney that I used to visit was far closer in visual feel to the Melbourne of today. In Melbourne the Hotel Windsor survives, whereas the Sydney equivalents such as the Metropole were torn down many years ago. Melbourne retains a visual unity, while Sydney has fragmented into multiple cities.

Where I part company with the writer to some degree is her assessment that Sydney is more American in appearance and lifestyle. Yes, it is more American in appearance than Melbourne, a charge levelled at the city for at least the last forty years. But Sydney is far more varied, more polyglot, than Melbourne, with a strong Asian-Pacific feel in parts contrasting to Melbourne's European style.

In all this, I regard Australia's regional diversity as one of the unsung life style strengths of the country.

Still using the Sydney/Melbourne example, I love visiting Melbourne with its cafe society because it is so different. For its part, Sydney is a wonderful city to visit because of its variety and the visual beauty of the Harbour backdrop. It's just an awful place in which to live!

When we extend this analysis across Australia, we are left with a smorgasbord of different life styles, cultures and attractions. Sometimes it can be difficult for those of us living here to see it. We actually have to leave the country to see the differences.

In the last few days, the airwaves and press in Sydney have been full of the attempts by the Lord Mayor to get licensing laws changed so that Sydney can have more small bars and cafes to rival Melbourne. It appears that Melbourne's social, cultural and tourist edge is getting just too great!

Since first adding this postcript I have found the story in the Sydney Morning Herald.

I am actually the writer of that blog post you are refering too. I am glad to see people are reading it and are interested in the issues I am attempting to bring up.

While yes my blog was a subtle stab at the Howard government and shamefully resorted to stereotypes it was an attempt, just like yours, to highlight the beauty of Aussie differences and our ability as a nation of immigrants (which appears to have a reputation as being quiet racist throughout american) can live together peacefully and embrace those differences.

I too agree with your analysis... as my point about Sydney being more american was directed towards having a more of a New York City lifestyle of varied nationals attempting to make it big in a largely fast paced city where outrageous housing prices reflect its finiancial orientation and dear I say it image of having a large consumer culture.

Then again I am young and therefore maybe just naive and misinformed. Either way it highlights the lessons that can be learnt by looking from the outside in. More simply it reinforces why we should be proud to be Australian (whatever being Australia might be personally).

Hi Splau, and thanks for this comment and for two reasons.

Because of the comment I went back to the original entry, this time reading all your posts from first to last. This took a bit of doing since I had to keep going back and forward in the author archive to keep in order.

I really enjoyed the posts. I do hope that you have them in hard copy. They will grow in value to you as time passes.

I had no problem with your stab at Mr Howard and did understand your purpose. So I hope that you do not think that I was being in any way critical. From my viewpoint your post was great because it provided such a wonderful entry point for some points I wanted to make.

I find it interesting that both Canada and Australia wrestle with the question of national identity. On the Canadian side Stephen Downes had an interesting post on this topic - http://halfanhour.blogspot.com/2007/08/culture-wars-and-canada.html.

From my viewpoint I am interested in the development of Australian thought and culture, trying to tease threads out. Here I suppose that one of my biggest concerns at the moment, one that we share, is what I see as the inward looking little Australian nationalism that Mr Howard does seem to be promoting.

Australia just is, Australians just are. As you say, "More simply it reinforces why we should be proud to be Australian (whatever being Australia might be personally)."

I must say that your comment on Sydney's consumer culture struck home. Sydney has always been more materialistic. As a mere male in a household of three women (wife, two daughters) I cannot share the love of shopping!

Do keep observing and writing. I find your observations neither naive or misinformed, just fresh and interesting.

i enjoyed reading the comparison between Sydney and Melbourne, i am relocated to Australia and wondering which city is best to raise small children and have a good family life

Hi Anon. That's a difficult question to answer because both cities are big and diverse.

Care to tell me a little more about your interests, objectives and the children's needs?

I have two children under the age of 10 and of course i am interested in the area where they will have better schools, parks, libraries and the family environment. also a major health concern since one of the children has severe Asthma.

Hi again, anon. I am going to reply as a full post. Will post the link here.

Thanks for the helpful information. Hope to hear more from you.
add your website in

hi mr/ms. anonymous,
thank you for enlightenining me.i am asian working in europe.i would like to move in to australia but my next choice would be canada. i am planning to travel next year to australia to experience life then apply for student visa i am confuse if melbourne or sydney.but since you have given me good details,thank you! btw,is australia is better than canada?i have read that australia is better when it comes to establish self and settlement.i have no relatives in australia, but i would like to try if i can have a better life in there.i mean, the truth and reality?thank you so much!

Both countries are pretty good, and in both you will find some resettlement issues. My inclination would be Australia, but that's perhaps because I know it best.