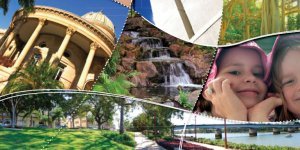 The various universities located in Regional Australia form a critical part of the regional infrastructure and offer an education that is as good, in many cases better, than that offered by their metro cousins.

The Central Queensland University was founded in 1967 as the Queensland Institute of Technology (Capricornia) and has 24 000 students from over 120 countries.

A leading provider of distance education, CQU has campuses in Rockhampton, Bundaberg, Gladstone, Mackay and Emerald plus delivery sites on the Sunshine Coast . The University operates international campuses in Sydney, Brisbane, Melbourne, Gold Coast and Fiji with offshore delivery sites in Hong Kong , Singapore and Shanghai.

The main campus is located in Rockampton, a major regional city with 60,000 living in the city itself, 100,000 in the greater Rockhampton area. The city is situated on Queensland's largest river, the Fitzroy, 40 kilometres inland from the beautiful Capricorn Coast beaches.

Like many other of Regional Australia's universities, CQU ranks high on student satisfaction.

According to The Good Universities Guide 2006 , no other Queensland university rates higher than CQU for positive graduate outcomes. The Guide gives CQU a top rating (5 stars) for graduate outcomes and above average (4-star) ratings for graduate starting salaries and job success. CQU graduates have one of the highest employment rates in the country. According to the Graduate Careers Council of Australia (2005), almost 91 per cent of CQU graduates with a bachelor degree found full-time work within four months of finishing university as compared to a national average of 81 per cent.

More than 100 undergraduate and postgraduate programs are offered by the University's three Faculties:

The University hosts the Institute for Sustainable Regional Development and is also a partner in four Co-operative Research Centres (CRCs):